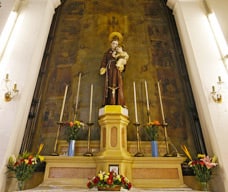 First built of bamboo and wood before 1560, this is one of the oldest churches in Macao, also marking the site where the Jesuits set up their earliest headquarters in the city. The church was reconstructed in stone several times, while the present appearance and scale of the church dates back to 1930. Previously, members of the Portuguese community would hold wedding ceremonies there, so giving rise to the Chinese name of Fa Vong Tong (Church of Flowers).