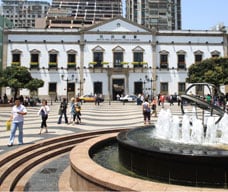 Originally built in 1784, this was Macao's first municipal chamber, a function it maintains to the present. The name "Leal Senado" ("Loyal Senate") derives from the title "City of Our Name of God Macao, There is None More Loyal" which was bestowed by Portuguese King Dom John IV in 1654. The "Leal Senado" Building is neo-classical in design and has retained all its original master walls and primary layout, including the courtyard garden in the back. Inside the building on the first floor there is a ceremonial meeting room that opens onto an elaborate carved library styled after the library of Mafra Convent in Portugal, and a small chapel.