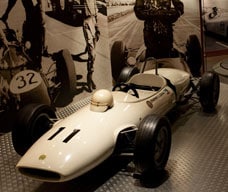 * To cope with the remodeling project, the Grand Prix Museum is temporarily closed until further notice.

Opened 1993 to celebrate the 40th anniversary of the Macau Grand Prix, which features a number of automobile and motorbike races and takes place every year in November. It started in 1954 due to the enthusiasm of a group of Macao residents and the support of the authorities. Today it is an international sports event that attracts thousands of tourists and racing enthusiasts to Macao, to watch the classic "Guia Race" and the "Formula 3 Grand Prix". As it takes place on a street circuit, which inevitably leads to a comparison with Monte Carlo, the Macau Grand Prix has been developing into a race that, due to the exactness and the need for precision which it imposes on the drivers, has had the participation of great names of the motor racing participating and which has also served as a launching platform for many other names, the visitor will certainly recognise while visiting the Grand Prix Museum.

In celebration of the 50th Macau Grand Prix, the Macao Government Tourism Office has carried out extensive renovations and modernization of the Museum.

The Museum pays tribute to individuals who have made extensive contributions to the success of the Grand Prix, namely Teddy Yip, Paul Du Toit, Laurel, Ayrton Senna and John Corsmit, among others. Come and discover the Grand Prix Museum, where a collection of magnificent machines that were raced and won the Guia circuit represent the history of one of the most exciting circuits in the world.