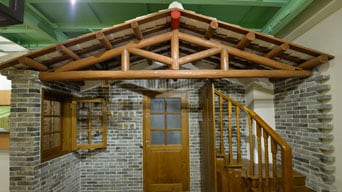 The Exhibition Room of Master Lu Ban's Woodcraft Works has been officially open to the public since July 2015 in the Carpenters Guildhall at no. 39-41 of Rua de Camilo Pessanha.

The Carpenters Guildhall building was constructed on the 20th year of the reign of Emperor Daoguang of the Qing Dynasty (ca. 1840), being this guildhall one of the earliest professional associations in Macao’s history. Between 2013 and 2014, the Cultural Affairs Bureau joined hands with the Macao Carpentry Trade Union and proceeded with the restoration of the building. In this way, it was possible to pay homage to master artisan Lu Ban for his contributions and to create a space where Macao’s traditional woodworks could be displayed, thus raising awareness among residents about this activity and the Guildhall itself and, at the same time, revitalizing an important cultural space. The restoration included preventing water infiltration and removal of salt from the walls on the first floor of Lu Ban's altar room, repairing bricks, reinforcing the structure of the building and reopening the skylight. It also included the conversion of the room previously used for the Union's activities into an exhibition room for traditional carpentry techniques, which, together with the main hall of Lu Ban's altar room and the outdoor courtyard, make up the current Exhibition Room of Master Lu Ban's Woodcraft Works, comprising a total area of 172 m2.

Currently, the altar's main hall displays a large version of 'Lu Ban So', also known as Lu Ban's lock, while the exhibition room showcases, through objects and multimedia, over 80 traditional wooden tools, including saws, planes, drills and ink markers, as well as  information about Lu Ban’s story, his inventions and the techniques for using carpentry tools. Also, building components which were built using the ‘mortise-and-tenon’ structure are on display and wooden tools are available for the use of visitors. All of these demonstrate the traditional craftsmanship and wisdom passed down from generations, allowing visitors to gain a better understanding of carpentry techniques and traditional industries. In addition, the Centre of Continuing Education and Special Projects of the Macao Polytechnic Institute provided historical materials and documents, as well as narrative documentaries, which further enriched the display content of the Exhibition Room of Master Lu Ban's Woodcraft Works.